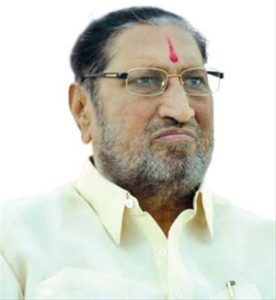 Sadashivrao Dadoba Mandlik (7 October 1934 – 10 March 2015) was a member of the 15th Lok Sabha of India from Kolhapur. Basically he believed in socialistic ideology and was associated with Indian National Congress and Nationalistic Congress Party with his unique identity and ideology. He was diehard follower of thoughts and ideology of Chh.Shivaji Maharaj, Ch.Shahu Maharaj, Mahatma Jotiba Phule and Dr. Babasaheb Ambedkar and devoted his life for the upliftment of socially downtrodden people, farmers, workers, students and women in Kolhapur district.

Sadashivrao Mandlik himself worked as an assistant teacher, the Head master of the school, which he started in the year 1960. Further leaving the role of highschool teacher, he became the teacher of the society and started his social work. He became Member of Legislative Assembly of Maharashtra four times during 1972, 1985, 1990 and 1995 respectively. He was minister for state having 6 portfolios. He represented the Kolhapur Loksabha Constituency four times (12th, 13th, 14th and15th Lok Sabha) as a Member of Parliament. From all these various posts he created works which help to improve the social, cultural, economical, agro-industrial, industrial and educational standards of Kolhapur district and especially of the Kagal Taluka. Spreading and stimulating educational institutions was one of the parts of his multi facilitated personalities.

The silhouette of his political and social career:

Contribution in Cooperative and other Social Movements